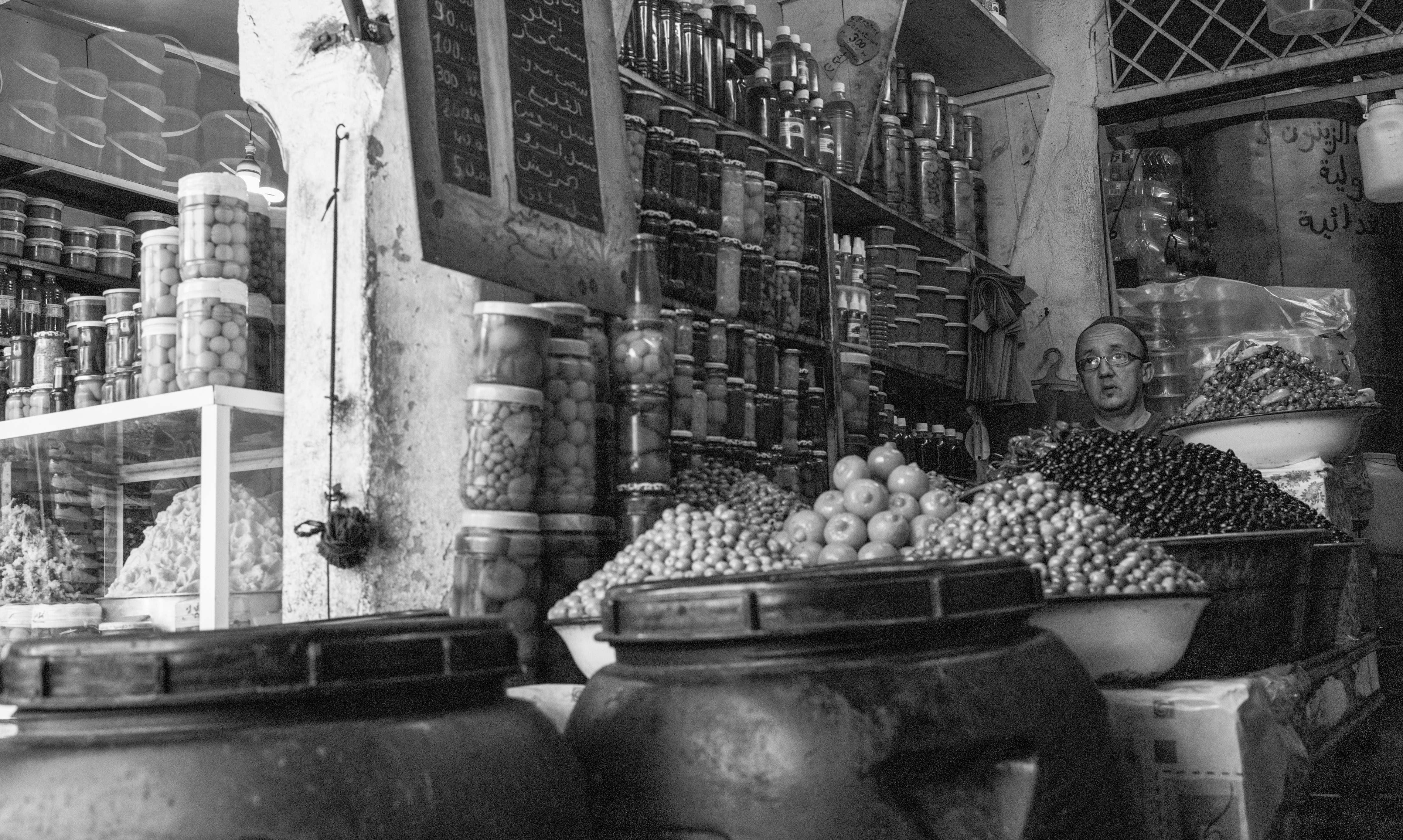 Far from the modern shopping malls, and with more smells, tastes and impressions.

The old town in Marrakech is amazing with all its small shops with people selling fruit, olives, nuts etc and this is just one of all these places.

To me, it was the whole scene with the head of the seller like it was on a plate for sale that captured my interest.

This image was literally shot from the hip since many don’t appreciate always having to participate in photos. In spite of this, it looks like I got the focus on the seller’s face as wanted.

Photographing in the Medina of Marrakech is very difficult since the light goes from pitch black to extreme highlights in the same image. Moreover, due to a rather hostile attitude to photographers shooting has to be from the hip with a zone focusing approach on the run.

In this case, I think I could have done better with reducing the aperture one to two steps to gain some depth of field, but most probably the used settings result from just leaving the dark side of the Medina and find this opportunity on the move. One can always argue if an increased ISO is an option, but I tend to not move above ISO 3200 if not really needed. As discussed on processing, the image is actually underexposed at least one to two stops, but as always with this camera, it’s better to underexpose than to blow highlights.

The original is underexposed one to two aperture stops, still blowing the lamps in the image and with increased exposure, the white wall to the right would be blown. Hence, the starting point is as good as possible from a tone curve perspective, and the processing aimed at mitigating the underexposure to bring out some contrasts in the image. Since our process is to first pick the wanted film emulation as part of the development, and let exposure tweaking to mainly be a question for the enlargement, I decided to go for the Affinity profile of a Polaroid 665 Negative HC shot. In the context of a normalized Leica M Monochrom image, this emulation’s main effect is to substantially increase the exposure of the mid-tones and slightly darken the lower 25% of the curve and level out the upper 25%. Hence, as the name of the emulation implicates, the choice to try to gain contrast but not further blow highlights or darken the shadows too much.

The resulting negative looks far from good, but by applying the standard Lightroom automatic toning which slightly increases the Exposure (+.0.7) and Contrast (+6), and shifts the Highlights (-65), Shadows (+59), Whites (+33) and Blacks (-20), a the wanted image look is obtained. Moreover, this did not result in any complete black or white areas since I also had decided to crop the image in a 7 x 6 format to exclude the parts that were gone already in the original and to slightly align the image with respect to the white wall in the image.